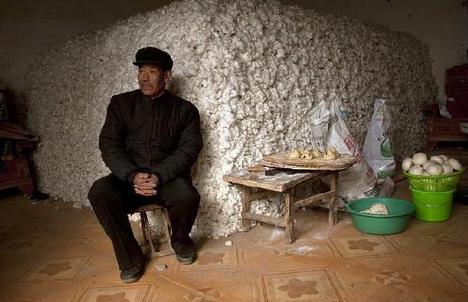 “Farmer Yu Feng tends his stockpile of roughly 7,700 pounds of cotton that he is storing in his home in Huji, China.” Source of caption and photo: online version of the WSJ article quoted and cited below.

In my Micro Principles classes I explain some of the variables that shift demand curves and some of the variables that shift supply curves. Supply curves, for instance, can be shifted by a change in the expectations of future prices. So, if suppliers come to expect that prices will go up in the future, that will shift the supply curve today to the left.
When I saw the photo above, I thought it was a wonderful illustration of the point.

(p. B1) Yu Lianmin, a cotton farmer in Huji, China, harvested 6,600 pounds of cotton this year. Despite record cotton prices, he didn’t sell any of it.
Instead, mounds of cotton are piled up in two empty rooms of Mr. Yu’s home, and the homes of many of the farmers in his small township of Yujia, which is part of the bigger township of Huji in northern Shandong province, 220 miles southeast of Beijing.
. . .
“I think there’s still hope for prices to go higher,” he said.
. . .
Expectations that prices will rise are driving the apparent stockpiling, . . .