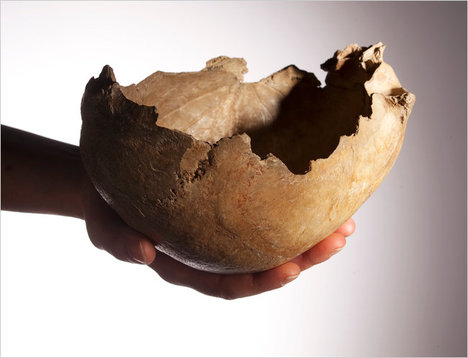 “Skull-cups found in Somerset, England, were worked with flint tools 14,700 years ago.” Source of caption and photo: online version of the NYT article quoted and cited below.

If you are one of those who longs nostalgically for the “Golden Age” of our hunter-gatherer paleolithic past, read on:

(p. D3) The three human braincases, two from adults and one from a child, were carefully skinned and cleaned with flint tools. The soft tissue was removed and probably consumed, leaving a well-shaped cup, perhaps made for use in some sort of ritual.

This is not a scene from a horror film. British paleoanthropologists report the discovery of these 14,700-year-old skull-cups in the journal PLoS One. They were found in Gough’s Cave in Somerset, England, and are the oldest directly dated skull-cups known, based on radiocarbon analysis.
. . .
Historical accounts hold that other human societies, like the Scythians, nomadic Indo-European warriors, used skull-cups to sip the blood of enemies. And as late as the 19th century, skull-cups were reportedly used in Fiji and other islands in Oceania.