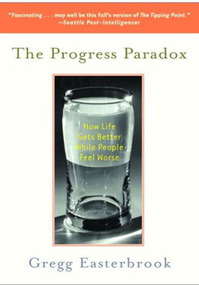 Greg Easterbrook’s book has been out for several years, but I am a slow reader and have a long “to read” list. I enjoyed the first half or so of the book very much, and also enjoyed some parts of the second half. Roughly speaking, the first half is devoted to illustrating how much better life is now than before, and here (the West) than there (the less-developed countries). Roughly speaking, the second half of the book asks why we aren’t happier, and complains about areas of life where Easterbrook sees room for improvement.
Some of the part I like has now been updated, or written with better argument or more panache, by Matt Ridley in The Rational Optimist. But even so, Easterbrook often gives examples, or arguments, that complement Ridley’s case.
And even though Ridley is on average more eloquent than Easterbrook, the latter is eloquent plenty often enough to be worth reading. (And maybe my judgment about eloquence is colored by my agreeing with Ridley 90% of the time, and only agreeing with Easterbrook 75% of the time.)
On the less-satisfying second half of the book: worthwhile questions are often asked, but the answers are few and not very satisfying.
In the next few weeks, I’ll occasionally be quoting a few of the more illuminating or edifying passages in the Easterbrook book.