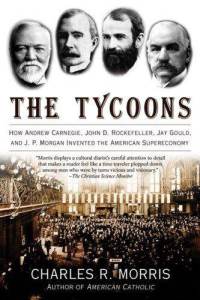 (p. 24) Judging by Charles R. Morris’s new book, “The Tycoons,” it takes about 100 years for maligned monopolists and “robber barons” to morph into admirable innovators.

Morris skillfully assembles a great deal of academic and anecdotal research to demonstrate that Andrew Carnegie, John D. Rockefeller, Jay Gould and J. P. Morgan did not amass their fortunes by trampling on the downtrodden or ripping off consumers – . . .
. . .
Though Morris only hints at it, the truth is that the real heroes of the American industrial revolution were not his four featured tycoons, but the American people themselves. I don’t mean this to sound like a corny burst of patriotism. In the 19th century, the United States was still young. Most families had either been booted out of Europe or fled it, and they didn’t care about tradition or the Old Guard. With little to lose, they were willing to bet on a roll of the dice, even if it was they who occasionally got rolled. Europe was encrusted with guilds, unions and unbendable rules. Britons took half a day to make a rifle stock, because 40 different tradesmen poked their noses into the huddle. American companies polished off new rifle stocks in 22 minutes.
The United States still holds an edge in its openness to innovation. In 1982, French farmers literally chased the French agriculture minister, Edith Cresson, off their fields with pitchforks because she suggested reform. By contrast, back in the late 1850’s, Abraham Lincoln was a hot after-dinner speaker. Was he discussing slavery? No. The title of his talk was “Discoveries and Inventions.” The real root of economic growth is not natural resources or weather or individual genius. It’s attitude, not latitude. The Austrian economist Joseph Schumpeter called innovations gales of “creative destruction.” Americans, not Europeans, had the gall to stare into those gales – with optimism.