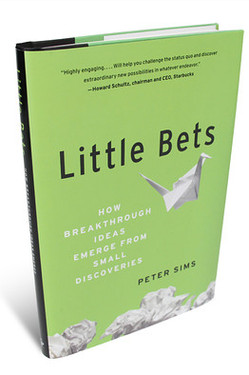 I am dubious of the main thesis of the book discussed in the review quoted below. But it sounds like an interesting read.

“I’ll be happy to give you innovative thinking,” a bedraggled employee tells his boss in a classic Leo Cullum cartoon. “What are the guidelines?”

Guidelines are what Peter Sims seeks to provide in “Little Bets,” an enthusiastic, example-rich argument for innovating in a particular way–by deliberately experimenting and taking small exploratory steps in novel directions. Some little bets will not pay off, of course, in which case little is lost; but others may pay off in big ways.
. . .
The point is that good (or even just delicious) ideas rarely emerge fully formed, like Athena from the head of Zeus; rather they evolve in a discursive and unpredictable fashion. The challenge is to enable this process rather than squelch it because it is hard to manage or because its results are hard to predict.
Light, bright and packed with tidy anecdotes, “Little Bets” feels at times like a motivational speaker’s presentation. Its claims are often attractive, but the analytical apparatus can be shaky: correlation is confused with causation; counter-evidence is ignored (such as those who put down small bets but never enjoy large returns); the role of circumstance or luck is underestimated; and some facts seem cherry-picked to push the message.

For the full commentary, see:
DAVID A. SHAYWITZ. “BOOKSHELF; Where the Action Is; Taking small exploratory steps and ‘prototyping,’ as when Chris Rock tests out jokes at obscure comedy clubs.” The Wall Street Journal (Fri., APRIL 22, 2011): A11.
(Note: ellipsis added.)