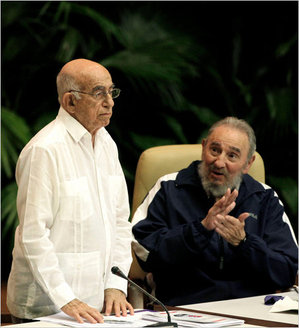 (p. A11) HAVANA — Cuba on Tuesday made the most significant change to its leadership since the 1959 revolution, naming someone other than the Castro brothers for the first time to fill the second-highest position in the Communist Party and possibly setting the stage for their eventual successor.

The appointment, at the party’s first congress in 14 years, coincided with a blizzard of changes opening the way for more private enterprise. Taken together, the actions were meant to pull the revolution, at 53, out of a midlife crisis that has led to a sinking economy and, even in the estimation of President Raúl Castro, stagnant thinking.
But Mr. Castro, for all his talk about the need to rejuvenate the system, in the end stuck with the old guard, many of them fellow military officers, for now.
“The rebel army is the soul of the revolution,” he said, quoting Fidel Castro, his brother.
President Castro, 79, had hinted that he might select a young up-and-comer to guide a post-Castro era. Instead, he tapped a party stalwart, José Ramón Machado, 80, who fought at his side in the mountains during the rebellion.