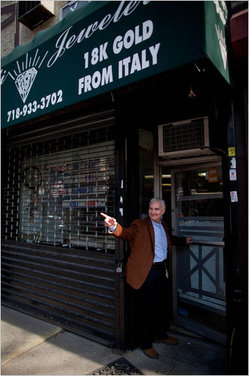 “Anthony Spinelli, outside his store in the Bronx on Thursday, was called brave for shooting a man suspected of trying to rob his shop.” Source of caption and photo: online version of the NYT article quoted and cited below.

(p. A23) On Arthur Avenue, a group of men piled out of Pasquale’s Rigoletto restaurant onto the sidewalk to pay their respects to a sudden local hero.

“Anthony, we love you,” they shouted across the street.
They summed up the local sentiment about a man, Anthony Spinelli, celebrated for protecting his livelihood. On Wednesday, Mr. Spinelli pulled one of two licensed guns in the store, and shot one of the three people suspected of trying to rob his Arthur Avenue jewelry store at gunpoint.
The Bronx neighborhood seemed energized by the event, which people here saw as a testament to the toughness of one of the last Italian neighborhoods in New York City.
“You don’t come in and try to take a man’s livelihood,” said Nick Lousido, who called himself a neighborhood regular. “His family’s store has 50 years on this block, they’re going to come in and rob him?”
On Thursday, Mr. Spinelli, 49, had returned to his shop and sized up the broken front windows and the mess inside. He said that a man and woman had entered his store, and the man had held a gun to his head while the woman had gone through jewelry drawers and stuffed jewelry into a bag. He said he had feared for his life, and that he was still shaken.
. . .
Next door to Mr. Spinelli’s shop is M & M Painter Supplies, which has photographs of Pope John Paul II and Mother Teresa next to a paint color chart on the wall.
“He’s a very brave man,” said the store owner, Ernie Verino. “He had the gun, and it takes guts to use it.”