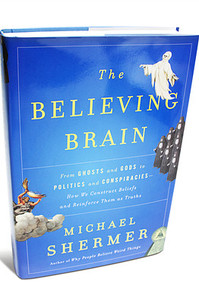 We learn the most when our priors are contradicted. But the dissonance between evidence and beliefs is painful. So we often do not see, or soon forget, evidence that does not fit with our beliefs.
The innovative entrepreneur is often a person who sees and forces herself to remember, the dissonant fact, storing it away to make sense of, or make use of, later. At the start, she may be alone in what she sees and what she remembers. So if we are to benefit from her ability and willingness to bear the pain of dissonance, she must have the freedom to differ, and she must have the financial wherewith-all to support herself until her vision is more widely shared, better understood, and more fruitfully applied.

(p. A13) Beliefs come first; reasons second. That’s the insightful message of “The Believing Brain,” by Michael Shermer, the founder of Skeptic magazine. In the book, he brilliantly lays out what modern cognitive research has to tell us about his subject–namely, that our brains are “belief engines” that naturally “look for and find patterns” and then infuse them with meaning. These meaningful patterns form beliefs that shape our understanding of reality. Our brains tend to seek out information that confirms our beliefs, ignoring information that contradicts them. Mr. Shermer calls this “belief-dependent reality.” The well-worn phrase “seeing is believing” has it backward: Our believing dictates what we’re seeing.
. . .
One of the book’s most enjoyable discussions concerns the politics of belief. Mr. Shermer takes an entertaining look at academic research claiming to prove that conservative beliefs largely result from psychopathologies. He drolly cites survey results showing that 80% of professors in the humanities and social sciences describe themselves as liberals. Could these findings about psychopathological conservative political beliefs possibly be the result of the researchers’ confirmation bias?
As for his own political bias, Mr. Shermer says that he’s “a fiscally conservative civil libertarian.” He is a fan of old-style liberalism, as in liberality of outlook, and cites “The Science of Liberty” author Timothy Ferris’s splendid formulation: “Liberalism and science are methods, not ideologies.” The “scientific solution to the political problem of oppressive governments,” Mr. Shermer says, “is the tried-and-true method of spreading liberal democracy and market capitalism through the open exchange of information, products, and services across porous economic borders.”
But it is science itself that Mr. Shermer most heartily embraces. “The Believing Brain” ends with an engaging history of astronomy that illustrates how the scientific method developed as the only reliable way for us to discover true patterns and true agents at work. Seeing through a telescope, it seems, is believing of the best kind.

For the full review, see:
RONALD BAILEY. “A Trick Of the Mind; Looking for patterns in life and then infusing them with meaning, from alien intervention to federal conspiracy.” The Wall Street Journal (Weds., July 27, 2011): A13.
(Note: ellipsis added.)

Book reviewed:
Shermer, Michael. The Believing Brain: From Ghosts and Gods to Politics and Conspiracies—How We Construct Beliefs and Reinforce Them as Truths. New York: Times Books, 2011.