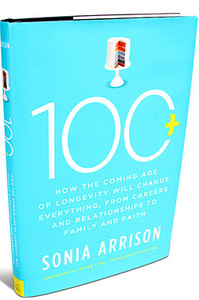 (p. A13) “We are at the cusp of a revolution in medicine and biotechnology,” Ms. Arrison announces, “that will radically increase not just our life spans but also, and more importantly, our health spans.”
. . .
She recounts advances in stem-cell research, pharmaceuticals and synthetic biology. And the tinkering with genes still goes on. We learn about Dr. Cynthia Kenyon at the University of California in San Francisco, who discovered that the life span of the tiny worm Caenorhabditis elegans could be doubled by partially disabling a single gene. Further improvements on the technique resulted in worms living six times longer than normal. “In human terms,” Ms. Arrison says, “they be the equivalent of healthy, active five-hundred-year-olds.” That may be a bit much to expect, but Ms. Arrison says she is confident that “human life expectancy will one day reach 150 years.”
. . .
What is more, technology heavyweights are paying attention, including Bill Gates (if he were a teenager today, Mr. Gates once said, he’d be “hacking biology”) and Jeff Bezos (“atom by atom we’ll assemble small machines that will enter cell walls and make repairs”). Larry Ellison, of Oracle, started a foundation more than a decade ago to support anti-aging research; the institution donates about $42 million a year.

For the full review, see:
NICK SCHULZ. “BOOKSHELF; Bioengineering Methuselah; Human beings living to be 150? And you thought Social Security and Medicare were in trouble now.” The Wall Street Journal (Weds., AUGUST 31, 2011): A13.
(Note: ellipses added.)

The book under review is:
Arrison, Sonia. 100 Plus: How the Coming Age of Longevity Will Change Everything, from Careers and Relationships to Family and Faith. New York: Basic Books, 2011.