(p. B14) Julius Blank, a mechanical engineer who helped start a computer chip company in the 1950s that became a prototype for high-tech start-ups and a training ground for a generation of Silicon Valley entrepreneurs, died on Saturday in Palo Alto, Calif.. He was 86.
. . .
Mr. Blank and his partners — who included Robert N. Noyce and Gordon E. Moore, the future founders of the Intel Corporation — began their venture as scientist-entrepreneurs in the wake of a mutiny of sorts against their common previous employer, the Nobel Prize-winning physicist William B. Shockley.
Dr. Shockley, . . . , had recruited the eight scientists from around the country in 1956 to work in his own semiconductor lab in nearby Mountain View, Calif.
The group left en masse the next year because of what its members described as Dr. Shockley’s authoritarian management style and their differences with him over his scientific approach. Dr. Shockley called it a betrayal.
Fairchild’s founders came to be branded in the lore of Silicon Valley as the “Traitorous Eight.” How that happened remains something of a mystery.
. . .
When he left Fairchild in 1969 — he was the last of the eight founding partners to depart — Mr. Blank became an investor and consultant to start-up companies and helped found the technology firm Xicor, which was sold in 2004 for $529 million to Intersil.
His former partners, in addition to founding Intel, had started Advanced Micro Devices and National Semiconductor. Mr. Kleiner had founded a venture capital firm that became an early investor in hundreds of technology companies, including Amazon.com, Google and AOL. Still, the greatest pleasure of his working life, Mr. Blank said in a 2008 interview for the archives of the Computer History Museum, a project in Silicon Valley, came with the uncertainty and camaraderie of “the early years, building something from nothing.”
Mr. Blank described a moment in the first days of Fairchild, just before production began in its factory built from nothing, when the ducts and plumbing and air-conditioning were set, and the new crystal growers and one-of-a-kind chip making machines were ready to be installed.
“I remember the day we finally got the floor tile laid,” he said. “And that night, Noyce and the rest of the guys came out and got barefoot and rolled their pants up and were swabbing the floors. I wish I had a picture of that.” 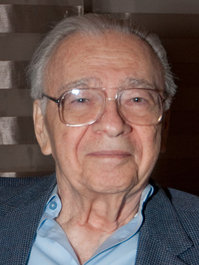 May 2011 photo of Julius Blank. Source of photo: online version of the NYT obituary quoted and cited above.