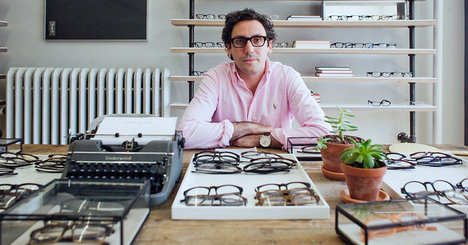 “Neil Blumenthal, one of the founders of Warby Parker, an online eyewear company, was invited to Washington in an initiative to encourage companies owned by members of the millennial generation.” Source of caption and photo: online version of the NYT article quoted and cited below.

(p. B7) Mr. Blumenthal, 31, one of the founders of Warby Parker, an online eyewear company that sells designer frames for less than $100, was among 150 young chief executives invited to Washington by Our Time, a youth advocacy group, . . .
. . .
The following is a condensed version of a recent conversation in which Mr. Blumenthal spoke, among other things, about what politicians don’t understand about business, . . .
. . .
Q. What was it like trying to get an S.B.A. loan?
A. Finding a bank that did S.B.A.-term loans was a challenge. We were surprised that they needed two years and that banks had absolutely no flexibility. Many of the loan officers said we had a reputable business that was cash-flow positive and we had the most sophisticated business plan they’d ever seen, but they can’t provide loans to people who don’t have two years of tax returns.
Q. Isn’t that a reasonable request when you’re talking about using taxpayer dollars to guarantee a loan to a private company?
A. I understand where the banks are coming from. It probably was necessary to implement hard and fast rules to stop the bleeding when the crisis hit, but they should be looking at the policies and thinking: Does this make sense now?
Q. Was the application process difficult?
A. We had to sign so many documents that my hand hurt after I was done. I had to pledge not to open a zoo, swimming pool or aquarium. It struck me as strange. Yes, it’s the bank’s duty to do due diligence, but this was just a silly restriction.
Q. But there was a happy ending, right?
A. Yes, after being turned down by 15 banks, it was a personal relationship that introduced us to a regional bank in New Jersey that gave us a $200,000 loan.
Q. What reasons did the 15 banks give for turning you down?
A. They didn’t have the authority to bypass the rule that you have to have two years of tax returns.
Q. Was your company profitable at the time?
A. Yes, we were profitable and we had a ton of traction. We had higher customer satisfaction scores than Zappos or Apple. A rational bank should have wanted to support us, even though we were a more risky bet than a company that had been around longer.
Q. What did the bank that lent you money do differently? Did it demand collateral?
A. We came through a personal relationship at a very high level at a regional bank in New Jersey that didn’t have the draconian guidelines because their management was empowered to make decisions. For the $200,000 S.B.A.-backed loan that we got, the bank wanted $100,000 in collateral in either cash or marketable products. The reason they wanted so much collateral was that if we default, the regional bank is not going to go through the process of getting the money from the S.B.A. because it’s so onerous.
. . .
Q. Are you involved in the political process?
A. We have never met with politicians. I don’t know the first thing about how to get heard. My suspicion is that it’s to donate a lot of money.
. . .
Q. What do you make of the economic turmoil we’ve been experiencing?
A. It highlights that it might be too much to ask Washington to help with entrepreneurship when they can’t even get the basics right, like maintaining a decent credit rating.