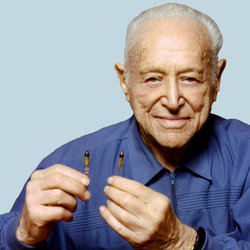 Norman Krim holding some early transistors. He first put transistors into hearing aids. Source of caption and photo: online version of the NYT obituary quoted and cited below.

(p. B11) Mr. Krim, who made several breakthroughs in a long career with the Raytheon Company and who had an early hand in the growth of the RadioShack chain, did not invent the transistor. (Three scientists did, in 1947, at Bell Laboratories.)

But he saw the device’s potential and persuaded his company to begin manufacturing it on a mass scale, particularly for use in miniaturized hearing aids that he had designed. Like the old tube, a transistor amplifies audio signals.
As Time magazine wrote in 1953: “This little device, a single speck of germanium, is smaller than a paper clip and works perfectly at one-tenth the power needed by the smallest vacuum tube. Today, much of Raytheon’s transistor output goes to America’s hearing aid industry.” (Germanium, a relatively rare metal, was the predecessor to silicon in transistors.)
. . .
Thousands of hearing-disabled people benefited from Mr. Krim’s initial use of the transistor in compact hearing aids. But not every transistor Raytheon made was suitable for them, he found.
“When transistors were first being manufactured by Raytheon on a commercial scale, there was a batch called CK722s that were too noisy for use in hearing aids,” said Harry Goldstein, an editor at IEEE Spectrum, the magazine of the Institute of Electrical and Electronics Engineers.
So Mr. Krim contacted editors at magazines like Popular Science and Radio Electronics and began marketing the CK722s to hobbyists.
“The result was that a whole generation of aspiring engineers — kids, really, working in their garages and basements — got to make all kinds of electronic projects,” Mr. Goldstein said, among them transistor radios, guitar amplifiers, code oscillators, Geiger counters and metal detectors. “A lot of them went on to become engineers.”
Mr. Ward called Mr. Krim “the father of the CK722.”