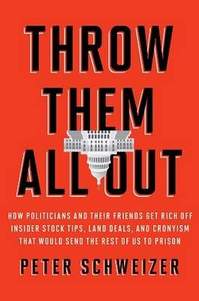 Source of book image: online version of the Omaha World-Herald review quoted and cited below.

(p. 9A) Peter Schweizer’s new book, “Throw Them All Out” (Houghton Mifflin Harcourt, 211 pages, $26) mostly goes after members of Congress for profiting from inside information and making investments that are legal for them but would be illegal for almost anyone else.

But Chapter 6 is titled, “Warren Buffett: Baptist and Bootlegger.”
Buffett is neither an actual Baptist nor a bootlegger, of course. Schweizer’s reference is to the alliance of churchgoers and illegal marketers of liquor who both favored laws to limit the legal sale of alcohol, although for different reasons.
Schweizer wrote that during the 2008-09 financial crisis, Buffett pushed for government action and called attention to the problems, looking like a noble Baptist, but profited from the bailouts, like a bootlegger, through investments in Goldman Sachs, General Electric, Wells Fargo and other financial companies.
“Buffett needed the bailout,” Schweizer wrote. “He began immediately to campaign for the $700 billion TARP rescue plan that was being hammered together in Washington.” Several senators, including Ben Nelson, D-Neb., are Berkshire shareholders, Schweizer wrote, “and they had to know that passing the bailout bill would bring big returns for their Berkshire stock.”
“There were many legitimate reasons to support the bill, and it can hardly be said that Buffett’s support was the deciding factor,” Schweizer wrote. “But his Baptist-bootlegger position was noteworthy for its strength in both directions: a lot of people followed his advice, and he and they made (p. 10A) a lot of money by pushing for the bailout. . . .
“Warren Buffett is a financial genius. But even more important for his portfolio, he’s a political genius.”