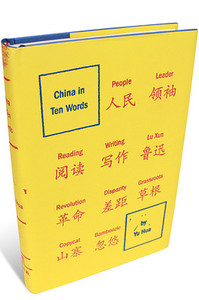 (p. A17) Yu Hua is one of China’s most acclaimed novelists, hugely popular in his own country and the recipient of several international literary prizes. He brings a novelist’s sensibility to “China in Ten Words,” his first work of nonfiction to be published in English. This short book is part personal memoir about the Cultural Revolution and part meditation on ordinary life in China today. It is also a wake-up call about widespread social discontent that has the potential to explode in an ugly way.
. . .
Mr. Yu argues that corruption infects every aspect of modern Chinese society, including the legal system. Historically, Chinese peasants with grievances could go to the capital and petition the emperor for redress. Today, Mr. Yu writes, millions–yes, millions–of desperate citizens flock to Beijing each year hoping to find an honest official who will dispense justice where the law has failed them at home. What will happen when they discover that their leaders at the national level are just as corrupt as those at the local level?
The violence and deprivations of the Cultural Revolution are by now well known, but Mr. Yu’s reminiscences add color and texture to what the world has learned in recent years about that lost decade. The youthful Yu Hua is something of a wise guy and a schemer, pitting himself against bureaucratic inanities. It is sometimes impossible to know whether to laugh or cry.
. . .
As awful as the Cultural Revolution was, in Mr. Yu’s telling its horrors sometimes pale next to those of the present day. The chapter on “bamboozle” describes how trickery, fraud and deceit have become a way of life in modern China. “There is a breakdown of social morality and a confusion in the value system of China today,” he states. He writes, for example, about householders around the country who are evicted from their homes on the orders of unscrupulous, all-powerful local officials.
Mr. Yu’s portrait of contemporary Chinese society is deeply pessimistic. The competition is so intense that, for most people, he says, survival is “like war.” He has few hopeful words to offer, other than to quote the ancient philosopher Mencius, who taught that human progress is built on man’s desire to correct his mistakes. Meanwhile, he writes, “China’s pain is mine.”