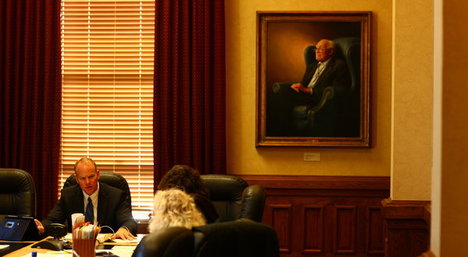 “Gov. Matt Mead at a meeting in the Capitol in Cheyenne. A portrait of his grandfather Clifford P. Hansen, a former governor, hangs behind him.” Source of caption and photo: online version of the NYT article quoted and cited below.

(p. A15) If Washington is broken and unable to lead — as millions of Americans believe, according to polls — then who is left to fill the void? Mr. Mead’s answer: States functional enough to soldier on through a time of dystopian crisis should be given the room to run. Whether they are led by conservatives or liberals does not matter so much, he said, as the ability to get things done.

“There certainly have to be national policies, and national rules and regulations — I understand that,” Mr. Mead, 49, a Republican and former prosecutor, said in an interview in his office here. “But I am in part a states’ rights guy because I think we can do so many things better.”
Better or not, Wyoming’s way — always idiosyncratic in the windblown, rural grain that mixes mind-your-own-business cowboy libertarianism and fiscal penny-pinching — is getting its moment in the spotlight.