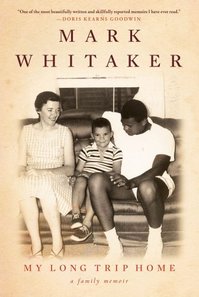 (p. C1) As a social studies major in his junior year at Harvard, Mark Whitaker attended a debate on the subject of ethnicity. One participant was the chairman of the department. Mr. Whitaker stood up to raise some questions.

“What would you tell someone who didn’t have a clear ethnic identity?” he asked. “For example, what would you tell someone who had one parent who was black and another who was white? Who had one parent who was American and another who was European? Who had moved dozens of times as a child and didn’t have a specific place to call home?” Everyone in the room knew that Mr. Whitaker was talking about himself.
“I guess I would say that that’s too bad,” the professor answered. “In the future I hope we don’t have too many more people like you.”
Mr. Whitaker recounts this story in “My Long Trip Home,” a book filled with as much family tumult as Jeannette Walls described in “The Glass Castle” and a racial factor to boot. It’s a story that registers not only for its shock value but also for the perspective and wisdom with which it can now be told.
The episode did not anger him, he said. He saw it as his professor’s Freudian slip, “exposing a wish to hold on to a sense of certainty about his roots in the face of a gathering demographic storm that threatened to wash them away.” But Mr. Whitaker’s troubled and combative black father, who is the book’s central figure through sheer force of personality, had a more heated reaction. “As I always say, scratch a white liberal and you’ll find a bigot,” Cleophaus Sylvester Whitaker Jr. told his son. 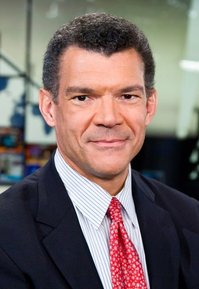 “Mark Whitaker” Source of caption and photo: online version of the NYT article quoted and cited above.