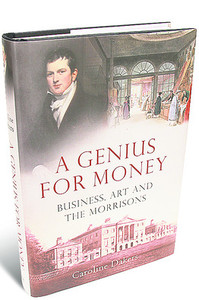 (p. A13) Morrison was not an inventor-capitalist but a retailing genius, more Sam Walton than Steve Jobs. He catered to England’s growing consumer class by diversifying his wares and, in his ever-growing network of shops, introducing luxurious showrooms. He was a disciple of volume, seeking “high turnover, small profits, and quick returns.” He sent his traveling men not to find buyers, as was typical, but to find the best suppliers. Advantageously purchased in bulk, goods would sell themselves. Morrison’s buyers were specialists, anticipating the practices of later department stores. He kept his finger on the pulse of fashion and on “market making” events. Legendarily, he was never caught short of black crepe when a member of the royal family was ill. “The Duke of York has died most conveniently,” he once quipped while tallying profits.
The “Napoleon of shopkeepers” went on to found his own merchant bank and accumulate a prodigious investment portfolio, much of it in American bonds. Strategic lending to broke aristocrats greased Morrison’s way into Parliament, where he served as a “radical Whig,” championing political reform and free trade.
. . .
. . . Morrison conducted both his retailing and his banking business with impeccable transparency. The investments he sold were honestly structured, and the risks he ran were his own, backed by sufficient collateral. Morrison’s was an era before bailouts, an era of some moral luck but little moral hazard. Markets rose and fell with reasonably predictable effects. For him and many of his contemporaries, credit remained a personal matter of the highest consequence. In this, alas, a character such as Morrison now seems more alien than familiar.

JEFFREY COLLINS. “BOOKSHELF; King of the Shopkeepers; The lessons of a merchant prince and a brilliant retailer whose wool, linen, silk, thread and lace flew off the shelves.” The Wall Street Journal (Mon., March 5, 2012): A13.
(Note: ellipses added.)

The book under review is:
Dakers, Caroline. A Genius for Money: Business, Art and the Morrisons. New Haven, CT: Yale University Press, 2012.