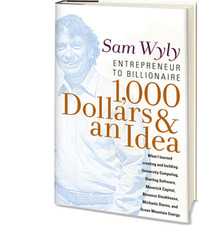 I sometimes divide entrepreneurs into two broad types: free agent entrepreneurs and innovative entrepreneurs. Free agent entrepreneurs are the self-employed. Innovative entrepreneurs are the agents of Schumpeter’s process of creative destruction.
Then there are entrepreneurs like Sam Wyly who don’t fit very well in either category.
He built or improved businesses in ways that made the world better, but usually did not involve breakthrough innovations.
Like many of the entrepeneurs considered in Amar Bhidé’s main books, Wyly grew businesses that served consumers, enriched investors and created jobs. Some of his most important start-ups, especially early-on, involved computer services. And his efforts to compete with the government-backed AT&T monopoly, were heroic.
I read the 2008 version of his autobiography a few months ago, and found that it contained a few stories and observations that are worth pondering. In the next few weeks I will briefly quote a few of these.