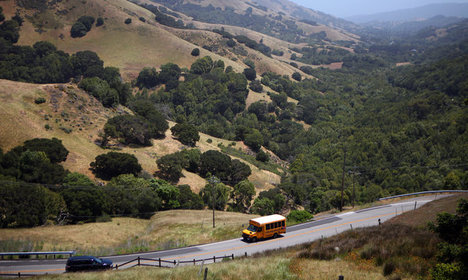 “Lucas Valley in Marin County, Calif., where residents’ objections led George Lucas to abandon a bid to expand operations at a new site near Skywalker Ranch.” Source of caption and photo: online version of the NYT article quoted and cited below.

(p. A13) SAN RAFAEL, Calif. — In 1978, a year after “Star Wars” was released, George Lucas began building his movie production company far from Hollywood, in the quiet hills and valley of Marin County here just north of San Francisco. Starting with Skywalker Ranch, the various pieces of Lucasfilm came together over the decades behind the large trees on his 6,100-acre property, invisible from the single two-lane road that snakes through the area.

And even as his fame grew, Mr. Lucas earned his neighbors’ respect through his discretion. Marin, one of America’s richest counties, liked it that way.
But after spending years and millions of dollars, Mr. Lucas abruptly canceled plans recently for the third, and most likely last, major expansion, citing community opposition. An emotional statement posted online said Lucasfilm would build instead in a place “that sees us as a creative asset, not as an evil empire.”
If the announcement took Marin by surprise, it was nothing compared with what came next. Mr. Lucas said he would sell the land to a developer to bring “low income housing” here.
. . .
Whatever Mr. Lucas’s intentions, his announcement has unsettled a county whose famously liberal politics often sits uncomfortably with the issue of low-cost housing and where battles have been fought over such construction before. His proposal has pitted neighbor against neighbor, who, after failed peacemaking efforts over local artisanal cheese and wine, traded accusations in the local newspaper.
The staunchest opponents of Lucasfilm’s expansion are now being accused of driving away the filmmaker and opening the door to a low-income housing development. That has created an atmosphere that one opponent, who asked not to be identified, saying she feared for her safety, described as “sheer terror” and likened to “Syria.”
Carl Fricke, a board member of the Lucas Valley Estates Homeowners Association, which represents houses nearest to the Lucas property, said: “We got letters saying, ‘You guys are going to get what you deserve. You’re going to bring drug dealers, all this crime and lowlife in here.’ “

For the full story, see:
NORIMITSU ONISHI. “A Pyrrhic Victory for Foes of a New Lucasfilm Project; In Lieu of digital Studio, Plan for Low-Income Homes.” The New York Times (Tues., May 22, 2012): A13 & A19.
(Note: ellipsis added.)
(Note: the online version of the story is dated May 21, 2012 and has the title “Lucas and Rich Neighbors Agree to Disagree: Part II.”) 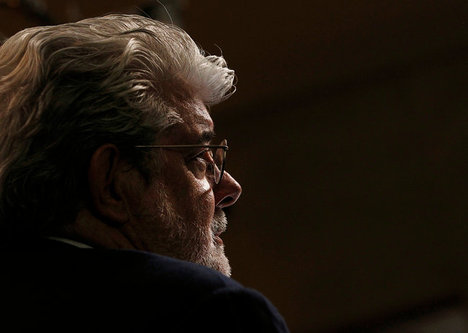