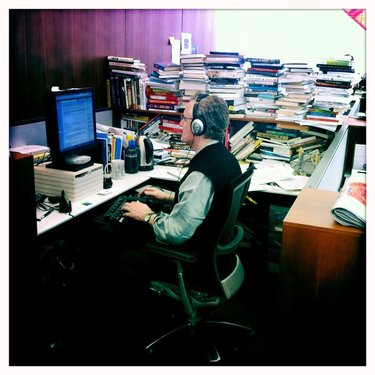 John Tierney “at his cubicle with a wall of books.” Source of caption quote and photo: online version of John Tierney’s NYT article quoted and cited below.

(p. 18) The original rationale for the open-plan office, aside from saving space and money, was to foster communication among workers, the better to coax them to collaborate and innovate. But it turned out that too much communication sometimes had the opposite effect: a loss of privacy, plus the urgent desire to throttle one’s neighbor.

“Many studies show that people have shorter and more superficial conversations in open offices because they’re self-conscious about being overheard,” said Anne-Laure Fayard, a professor of management at the Polytechnic Institute of New York University who has studied open offices. . . .
Take Mr. Udeshi’s office, at the N.Y.U.-Poly business incubator, a SoHo loft with dozens of start-up companies housed in low cubicles. The entrepreneurs there say they sometimes get useful ideas from overheard conversations but also find themselves retreating to a bathroom or a broom closet for private chats. When they have to discuss a delicate matter with someone sitting next to them, they often use e-mail or instant messaging.
“You talk to more people in an open office, but I think you have fewer meaningful conversations,” said Jonathan McClelland, an energy consultant working in the loft. “You end up getting interrupted a lot by people’s random thoughts.”
. . .
Researchers at Finland’s Institute of Occupational Health have studied precisely how far those conversations carry and analyzed their effect on the unwilling listener: a decline of 5 percent to 10 percent on the performance of cognitive tasks requiring efficient use of short-term memory, like reading, writing and other forms of creative work.
“Noise is the most serious problem in the open-plan office, and speech is the most disturbing type of sound because it is directly understood in the brain’s working memory,” said Valtteri Hongisto, an acoustician at the institute. He found that workers were more satisfied and performed better at cognitive tasks when speech sounds were masked by a background noise of a gently burbling brook