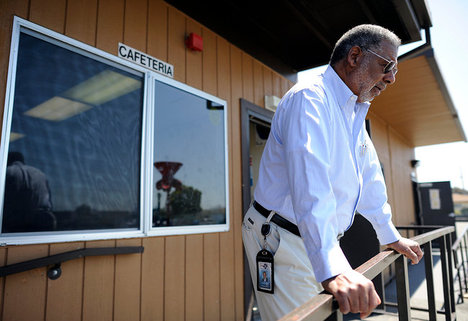 “One vocal opponent of the tax is Courtland Boozé, a City Council member who calls it a hardship on poor people.” Source of caption and photo: online version of the NYT article quoted and cited below.

(p. 14) Even here at a sweaty Zumba class sponsored by a nonprofit group called Weigh of Life, the city’s proposal for a one-cent-per-ounce tax on sugar-sweetened beverages, which is to appear on the November ballot, meets up against the hard realities of residents’ lives.

“What don’t I have?” asked Rita Cerda, a longtime soda devotee, ticking off her ailments, including diabetes, high blood pressure and asthma. She is also overweight.
“I have problems drinking water,” she said. “I don’t like water.”
The proposed tax, a license fee on businesses selling sweetened drinks, would require owners of bodegas, theaters, convenience stores and other outlets to tally ounces sold and, presumably, pass the cost on to customers.
. . .
Courtland Boozé is a City Council member and a vocal opponent of the soda tax. “We are primarily an economically suppressed community,” he said. “It will be a huge hardship.
“I eat sweet potato pie and candied yams,” continued Mr. Boozé, who is from Louisiana. “And what about cupcakes? Are they going to tax those?”
The city’s Chamber of Commerce is also opposed to the tax. A group fighting the tax that includes the beverage industry has begun dropping off “Community Coalition Against Beverage Taxes” placards at La Flore de Jalisco Market, a small, cheerful grocery store where soda bottles in dozens of hues match the colorful piñatas hanging from the ceiling.
. . .
Charles Finnie, known as Chuck, a vice president of BMWL, a San Francisco lobbying firm, called the tax “an administrative nightmare for local businesses” that would also put them at a competitive disadvantage, with customers opting for cheaper soda in nearby cities.
. . .
At the RYSE Youth Center, founded 12 years ago after the killing of four high school students, the soda issue seemed both close to the heart and far away.
Kayla Miller, an 18-year-old college freshman, said that if complexion problems from too much sugar would not deter her friends from drinking sodas, neither would a tax.
Shivneel Sen, 14, does not favor the tax but knows how the money should be spent if it passes.
“The police came heck of late,” he said, recalling the recent death of a best friend. “We need more of them.”
Kimberly Aceves, the center’s executive director, says that too often, the burden for making healthy choices falls unfairly on young people. Society may say “go exercise,” she said, “but if the community isn’t safe, how many kids are going to go out running?”
“Soda is bad for you,” Ms. Aceves said. “So is violence.”