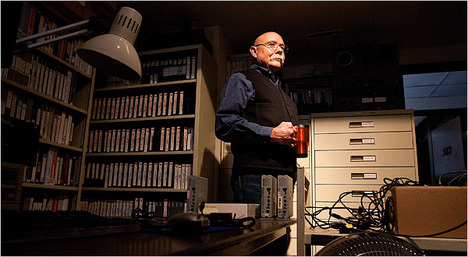 “Charlie Seemann at the Western Folklife Center in Elko, Nev., home to an annual festival that draws thousands of cowboy poets and their fans.” Source of caption and photo: online version of the NYT article quoted and cited below.

(p. A15) ELKO, Nev. — This isolated town in the northeast Nevada mountains is known for gold mines, ranches, casinos, bordellos and J. M. Capriola, a destination store with two floors of saddles, boots, spurs and chaps. It is also the birthplace of the annual Cowboy Poetry Gathering, a celebration of range song and poetry that draws thousands of cowboys and their fans every January and receives some money from the federal government.
. . .
Senator Harry Reid of Nevada, a Democrat and the majority leader, invoked the event in arguing against Republican cuts in arts financing in the budget debate, setting off a conflagration of conservative scorn.
. . .
“He was trying to defend the National Endowment for the Humanities and the N.E.A., and he thought, this is something that he was familiar with and he’s always liked, and he was holding this up as an example,” said Charlie Seemann, the executive director of the Western Folklife Center, a converted 98-year-old hotel on Railroad Street. “And, whoops! In this political climate it was too good a target: ‘Cowboy poetry, say what? We’re paying for that?’
. . .
“Given where we are with our financial situation — and some people would argue regardless of that — this is not something that the federal government should be doing,” said Thomas A. Schatz, the president of Citizens Against Government Waste. “If people want to support a certain amount of activity in the arts or humanities, they should be paying for it. And the fact that Senator Reid for some reason picked this as an example of how extreme the Republican budget was — he might have picked something else.”
Inevitably, some of the argument, as it were, is taking place in verse. Representative Jeff Flake, a conservative Republican from Arizona, posted this on his Twitter account:

Way out in the prairie

To a rustler named Harry
Being broke ain’t no reason to sweat
Just sit in yer barn
Spin a rhythmic yarn
And you’ll pay down the national debt!