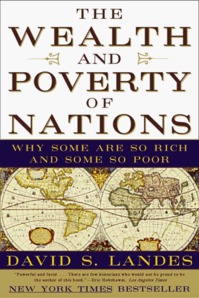 In the piece quoted below, and in much of the TV media coverage, the story is spun as being that Romney offended the Palestinians. But that is not the story. The story is that Romney courageously highlighted an important, but politically incorrect, truth—culture, generally, does matter for economic performance; and Israeli culture, specifically, has encouraged economic growth.
Romney referred to an important book by the distinguished economic historian David Landes. Last school year, one of the students in my Economics of Technology seminar gave a presentation on a related Landes book. That presentation can be viewed at: http://www.amazon.com/review/R2GLBAMFCS5PXH/ref=cm_cr_pr_perm?ie=UTF8&ASIN=0521094186&linkCode=&nodeID=&tag=
I recently read another relevant book, Start-Up Nation, that directly supports Romney’s specific claim, by making the case that Israeli culture is especially congenial to entrepreneurial initiative and success.

(p. A1) JERUSALEM — Mitt Romney offended Palestinian leaders on Monday by suggesting that cultural differences explain why the Israelis are so much more economically successful than Palestinians, thrusting himself again into a volatile issue while on his high-profile overseas trip.
. . .
In the speech, Mr. Romney mentioned books that had influenced his thinking about nations — particularly “The Wealth and Poverty of Nations,” by David S. Landes, which, he said, argues that culture is the defining factor in determining the success of a society.
“Culture makes all the (p. A14) difference,” Mr. Romney said. “And as I come here and I look out over this city and consider the accomplishments of the people of this nation, I recognize the power of at least culture and a few other things.”
He added, “As you come here and you see the G.D.P. per capita, for instance, in Israel, which is about $21,000, and compare that with the G.D.P. per capita just across the areas managed by the Palestinian Authority, which is more like $10,000 per capita, you notice such a dramatically stark difference in economic vitality. And that is also between other countries that are near or next to each other. Chile and Ecuador, Mexico and the United States.”
The remarks, which vastly understated the disparities between the societies, drew a swift rejoinder from Palestinian leaders.

The book on Israeli entrepreneurship, that I mention in my comments, is:
Senor, Dan, and Saul Singer. Start-Up Nation: The Story of Israel’s Economic Miracle. hb ed. New York: Twelve, 2009.

One thought on “Romney Right that Culture Matters for Economic Success”