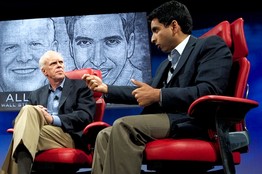 (p. R8) Is there anything to be done about the rising price of higher education? That was the question posed to John Hennessy, president of Stanford University, and Salman Khan, founder of Khan Academy, a nonprofit online-learning organization. They sat down with The Wall Street Journal’s Walt Mossberg to discuss how technology might be part of the solution.

Here are edited excerpts of their conversation.
. . .
MR. MOSSBERG: You have a lot of money at Stanford. I’ve been, until recently, a trustee of Brandeis University. It’s a very good university. It charges about what you do. But it doesn’t have your money, and there are a lot of colleges like that.
MR. HENNESSY: Agreed, and if you look at the vast majority of colleges in the U.S., there are way too many that are [dependent on tuition to fund their budgets]. That is not sustainable. We have to do something to bend the cost curve, and this is where technology comes in.
MR. KHAN: On the sustainability question, I agree. I think the elites will probably do just fine, but for the bulk of universities, nothing can grow 5% faster than inflation forever. It will just take over the world, and that’s what’s happening now.
There is a fundamental disconnect happening between the providers of education and the consumers of education. If you ask universities what they are charging the $60,000 for, they’ll say, “Look at our research facilities. Look at our faculty. Look at the labs and everything else.” And then if you ask the parents and the students why they are taking on $60,000 of debt, they’ll say, “Well, I need the credential. I need a job.”
So one party thinks they’re selling a very kind of an enriching experience, and the other one thinks that they’re buying a credential. And if you ask the universities what percentages of your costs are “credentialing,” they say oh, maybe 5% to 10%. And so I think there’s an opportunity if we could decouple those things–if the credentialing part could happen for significantly less.
MR. MOSSBERG: What do you mean by the credentialing part?
MR. KHAN: If you think about what education is, it’s a combination. There’s a learning part. You learn accounting, you learn to write better, to think, whatever. Then there is a credentialing part, where I’m going to hand you something that you can go take into the market and signal to people that you know what you’re doing.
Right now they’re very muddled, but this whole online debate or what’s happening now is actually starting to clarify things. At Khan Academy we’re 100% focused on the learning side of things. And I think it would be interesting [if credentials could be earned based on what you know and not on where you acquired that knowledge].

For the full interview, see:
Walt Mossberg, interviewer. “Changing the Economics of Education; John Hennessy and Salman Khan on how technology can make the college numbers add up.” The Wall Street Journal (Mon., June 4, 2012): R8.
(Note: bracketed words in caption, and ellipses, added; bold and italics in original.)