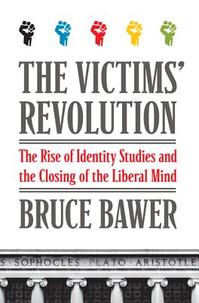 (p. 20) A couple of years ago, Bawer made a trip home to see what’s happened to the academic world he left behind. He attended a few conferences for women’s studies, black studies, queer studies and Chicano studies, where he heard plenty of cant, as when a participant at a “Fat Studies” conference explained her veganism by declaring: “Dairy is a feminist issue. Milk comes from a grieving mother.” He found, in abundance, what he’s looking for: ­jargon-spewing careerists posing as radicals, semiliterate professors of literature and widespread condemnation of reason itself as a hoax perpetrated by the powerful on the powerless. Based on this sample, he concludes that the contemporary American academy is a place of hypocrisy and fear, where tenured professors proclaim empty solidarity with exploited workers, and Take Back the Night rallies promote the idea that “male students metamorphose, werewolf-like, into potential rapists” every night.
. . .
The humanities and “soft” social science departments that Bawer mocks are sinking into insignificance — partly, to be sure, because they have purveyed the kind of buffoonery he decries.

For the full review, see:
ANDREW DELBANCO. “Back to School.” The New York Times Book Review (Sun., August 26, 2012): 1 & 20.
(Note: ellipsis added.)
(Note: the online version of the article is dated August 23, 2012 and had the title “Academic Battleground; ‘The Victims’ Revolution,’ by Bruce Bawer.”)
(Note: in the print version, the review started in the left column of the first page under the title “Back to School.” The title was shared by a review of another book, that started in the right column of the first page.)

The full reference for the book under review, is:
Bawer, Bruce. The Victims’ Revolution: The Rise of Identity Studies and the Closing of the Liberal Mind. New York: Broadside Books, 2012.