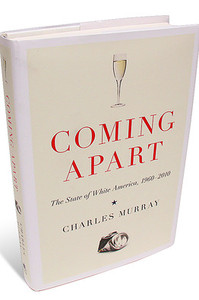 (p. C2) There remains a core of civic virtue and involvement in working-class America that could make headway against its problems if the people who are trying to do the right things get the reinforcement they need–not in the form of government assistance, but in validation of the values and standards they continue to uphold. The best thing that the new upper class can do to provide that reinforcement is to drop its condescending “nonjudgmentalism.” Married, educated people who work hard and conscientiously raise their kids shouldn’t hesitate to voice their disapproval of those who defy these norms. When it comes to marriage and the work ethic, the new upper class must start preaching what it practices.

For the full essay, see:
CHARLES MURRAY. “The New American Divide; The ideal of an ‘American way of life’ is fading as the working class falls further away from institutions like marriage and religion and the upper class becomes more isolated. Charles Murray on what’s cleaving America, and why.” The Wall Street Journal (Sat., January 21, 2012): C1-C2.