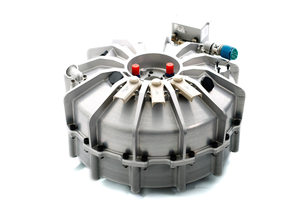 (p. B4) European auto makers might turn to an unlikely source to reduce fuel consumption and pollution: gas-guzzling Formula One race cars.

Rotating mechanical devices called flywheels developed for these speed machines could make everyday cars more powerful and efficient.
. . .
Flywheels have been around since the Industrial Revolution, when they were widely used in steam engines. Mounted on a crankshaft, these spinning discs provide a steady flow of energy when the energy source isn’t constant, as is the case with piston-driven engines in cars.
Flywheels can range from about a meter in diameter to less than three centimeters, depending on the amount of energy required. The larger and heavier the flywheel is, the more inertial energy it delivers when spinning.
In miniature form, they show up in friction toy cars that are driven by a flywheel and speed up when the toy is rolled quickly across a surface. When the car is let go, it is the flywheel that speeds the car across the floor.
Until recently, flywheels–known in the auto industry as kinetic energy recovery systems, or KERS–have been too heavy or too bulky to use on road vehicles. But that is changing, thanks to new, lighter materials, high-tech engineering and power-management systems.

For the full story, see:
DAVID PEARSON. “NEXT IN TECH; An Unlikely Fuel Saver: Racing Cars; To Reduce Pollution, Auto Makers Experiment With Flywheels Developed for Formula One Motors.” The Wall Street Journal (Tues., August 21, 2012): B4.
(Note: ellipsis added.)
(Note: the online version of the article was updated August 22, 2012.)