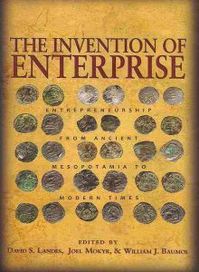 [p. 167] The book . . . contains a variety of entertaining stories and colorful facts about entrepreneurship that could potentially be used for teaching. [p. 168] Murray, for instance, explains that the word “entrepreneur” was borrowed from the French language in the late Middle Ages, a time when it was used to describe a battlefield commander (p. 88). Kuran describes how Middle Eastern coffee entrepreneurs originally faced harsh resistance from many clerics who believed that “coffee drinkers reap hell-fire” (pp. 71-72). Hudson traces early merchant activity and entrepreneurship all the way back to Sumerian cities in Mesopotamia in the third millennium BC (pp. 11-17). These cities, made rich by their fertile alluvial soil, still needed to acquire other important minerals, missing in their own ground, from the distant Iranian plateau or Anatolia. Since military conquest proved too expensive and because the Sumerian cities really needed these resources, they pioneered international import-export activities in their temples and palaces.

For the full review, see:
Bikard, Michael, and Scott Stern. “The Invention of Enterprise: Entrepreneurship from Ancient Mesopotamia to Modern Times.” Journal of Economic Literature 49, no. 1 (March 2011): 164-68.
(Note: ellipsis added.)
(Note: the page numbers in square parentheses refer to the review; the page numbers in curved parentheses refer to the book under review.)