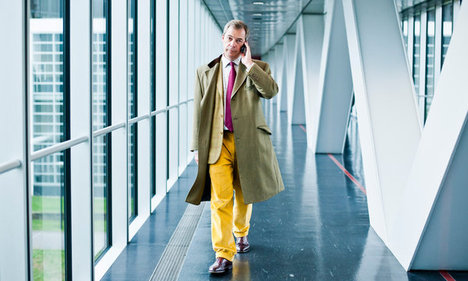 “Nigel Farage has waged a 20-year campaign to get Britain to leave the European Union.” Source of caption and photo: online version of the NYT article quoted and cited below.

(p. A7) Strasbourg, France  THE floor of the European Union’s cavernous and mostly vacant parliamentary chamber here is hardly known for its lively debates. At least not until Nigel Farage, the Brussels-bashing leader of Britain’s fastest growing political party, gets up to speak.

The vast majority of the European Parliament’s 754 members, as they process the torrent of rules and regulations that Europe bestows upon them, are not inclined to question why they are here. The pay and perks are generous for those elected to five-year terms in low-turnout elections throughout the European Union’s 27 member countries. And the mission — to extend the sweep of European federalism — is for most a shared one.
But for Mr. Farage, who has waged a 20-year campaign to get Britain to leave the European Union, Strasbourg has become the perfect stage to disseminate his anti-European Union message by highlighting the bloc’s bureaucratic absurdities and spendthrift tendencies as well as by mocking with glee the most prominent proponents of a European superstate: the head of the European Commission, José Manuel Barroso, and the European Council president, Herman Van Rompuy. “I said you’d be the quiet assassin of nation-state democracy,” Mr. Farage has declared, as his target, Mr. Van Rompuy, squirmed in his seat just opposite, “and sure enough, in your dull and technocratic way, you’ve gone about your course.”
. . .
Last year, in net terms, Britain paid $16 billion to the European Union. But according to a recent study by the economist Tim Congdon, himself an Independence Party member, if the cost of regulation, waste and misallocated resources is included, the annual cost of membership rises to $238 billion a year, or about 10 percent of Britain’s economic output.
Perhaps the most egregious example of this profligacy is the spot where Mr. Farage has found fame: the European Parliament. As most of the legislative work is done in Brussels, the building is in use just three days each month. Analysts estimate that it costs taxpayers about $250 million a year to transport each month 754 members of Parliament, several thousand support staff members and lobbyists to this French city.
Mr. Farage lights another cigarette and shakes his head. “I just would like for my grandchildren to read some day that I did my part in saving my country from this lunacy,” he said with a sigh.

The Tim Congdon report mentioned is:
Congdon, Tim. “How Much Does the European Union Cost Britain?” UK Independence Party, 2012.
(Note: the report calculates a total cost of about 150 billion British pounds, which when converted to dollars is equal to the $238 billion reported in the article, at an exchange rate of about $1.587 per British pound.)