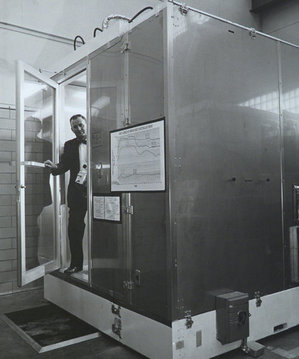 “Willis Whitfield with a mobile clean room in the 1960s.” Source of caption and photo: online version of the NYT article quoted and cited below.

(p. B16) Half a century ago, as a rapidly changing world sought increasingly smaller mechanical and electrical components and more sanitary hospital conditions, one of the biggest obstacles to progress was air, and the dust and germs it contains.
. . .
Then, in 1962, Willis Whitfield invented the clean room.
“People said he was a fraud,” recalled Gilbert V. Herrera, the director of microsystems science and technology at Sandia National Laboratories in Albuquerque. “But he turned out to be right.”
. . .
His clean rooms blew air in from the ceiling and sucked it out from the floor. Filters scrubbed the air before it entered the room. Gravity helped particles exit. It might not seem like a complicated concept, but no one had tried it before. The process could completely replace the air in the room 10 times a minute.
Particle detectors in Mr. Whitfield’s clean rooms started showing numbers so low — a thousand times lower than other methods — that some people did not believe the readings, or Mr. Whitfield. He was questioned so much that he began understating the efficiency of his method to keep from shocking people.
“I think Whitfield’s wrong,” a scientist from Bell Labs finally said at a conference where Mr. Whitfield spoke. “It’s actually 10 times better than he’s saying.”