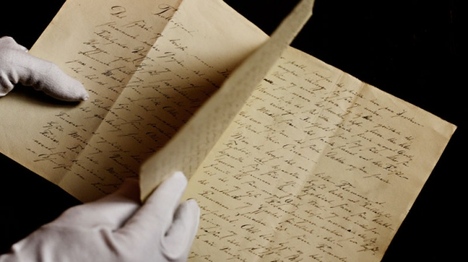 “A newly found manuscript of a fairy tale by Hans Christian Andersen, which has been located in Odense, is pictured in the State Archives in Copenhagen, Denmark, Wednesday, Dec. 12, 2012. The story of ‘The Tallow Candle’ might have been written about 1823, when he was 18 year old.” Source of caption and photo: http://www.ctvnews.ca/entertainment/new-found-tale-of-a-lonely-candle-could-be-early-work-of-hc-andersen-1.1077533#ixzz2GmTQNcFvhttp://www.ctvnews.ca/polopoly_fs/1.1077539!/

(p. C2) A fairy tale about a lonely candle that wants to be lighted had been languishing in a box in Denmark’s National Archives for many years. In October it was discovered by a retired historian, who now believes it is one of the first fairy tales ever written by Hans Christian Andersen.
. . .
The six-page manuscript, called “Tallow Candle,” is dedicated to a vicar’s widow named Bunkeflod who lived across the street from Andersen’s home. Ejnar Stig Askgaard, a Hans Christian Andersen expert, said the work was probably one of Andersen’s earliest.

For the full story, see:
CAROL VOGEL. “Discovery of Story Is Like a Fairy Tale.” The Wall Street Journal (Fri., December 14, 2012): C2.
(Note: ellipsis and underline added; bold in original.)
(Note: the online version of the story has the date December 13, 2012, and has the title “Like a Fairy Tale: Hans Christian Andersen Story Is Found in a Box.”)
(Note: the words underlined by me above, were in the online, but not the print, version of the article.)