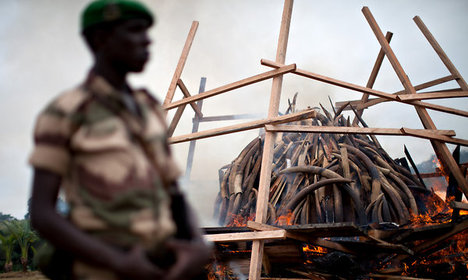 “SEIZED AND DESTROYED; Gabon burned 10,000 pounds of ivory in June to show its commitment against poaching, but elephants are still being slaughtered.” Source of caption and photo: online version of the NYT article quoted and cited below.

(p. A5) But as the price of ivory keeps going up, hitting levels too high for many people to resist, Gabon’s elephants are getting slaughtered by poachers from across the borders and within the rain forests, proof that just about nowhere in Africa are elephants safe.

In the past several years, 10,000 elephants in Gabon have been wiped out, some picked off by impoverished hunters creeping around the jungle with rusty shotguns and willing to be paid in sacks of salt, others mowed down en masse by criminal gangs that slice off the dead elephants’ faces with chain saws. Gabon’s jails are filling up with small-time poachers and ivory traffickers, destitute men and women like Therese Medza, a village hairdresser arrested a few months ago for selling 45 pounds of tusks.
“I had no idea it was illegal,” Ms. Medza said, almost convincingly, from the central jail here in Oyem, in the north. “I was told the tusks were found in the forest.”
She netted about $700, far more than she usually makes in a month, and the reason she did it was simple, she said. “I got seven kids.”
It seems that Gabon’s elephants are getting squeezed in a deadly vise between a seemingly insatiable lust for ivory in Asia, where some people pay as much as $1,000 a pound, and desperate hunters and traffickers in central Africa.
. . .
In June, Gabon’s president, Ali Bongo, defiantly lighted a pyramid of 10,000 pounds of ivory on fire to make the point that the ivory trade was reprehensible, a public display of resolve that Kenya has put on in years past. It took three days for all the ivory to burn, and even after the last tusks were reduced to glowing embers, policemen vigilantly guarded the ashes. Ivory powder is valued in Asia for its purported medicinal powers, and the officers were worried someone might try to sweep up the ashes and sell them.
Some African countries, like Zimbabwe and Tanzania, are sitting on million-dollar stockpiles of ivory (usually from law enforcement seizures or elephants that died naturally) that someday may be legal to sell.
. . .
(p. A10) The growing resentment of the government is undermining conservation efforts, too, with villagers grumbling about not seeing a trace of the oil money and saying Mr. Bongo should not lecture them about poaching for a living.
. . .
The children here eat thumb-size caterpillars, cooked in enormous vats, because there is little else to eat. Many men have bloodshot eyes and spend their mornings sitting on the ground, staring into space, reeking of sour, fermented home-brew.
. . .
International law enforcement officials say the illicit ivory trade is dominated by Mafia-like gangs that buy off local officials and organize huge, secretive shipments to move tusks from the farthest reaches of Africa to workshops in Beijing, Bangkok and Manila, where they are carved into bookmarks, earrings and figurines.
But often the first link in that chain is a threadbare hunter, someone like Mannick Emane, a young man in Bitouga. Adept in the forest, he was trained nearly from birth to follow tracks and stalk game, and was puffing idly on a cigarette he had just lighted with a burning log.
He conceded he would kill elephants, “for the right price.”
“Life is tough,” he said. “So if someone is going to give us an opportunity for big money, we’re going to take it.”
Big money, he said, was about $50.
His friend Vincent Biyogo, also a hunter, nodded in agreement.
“When I was born,” he said, “I dreamed of a better life, I dreamed of driving a car, going to school, living like a normal human being.”
“Not this,” he added quietly, staring at a pot of boiling caterpillars. “Not this.” 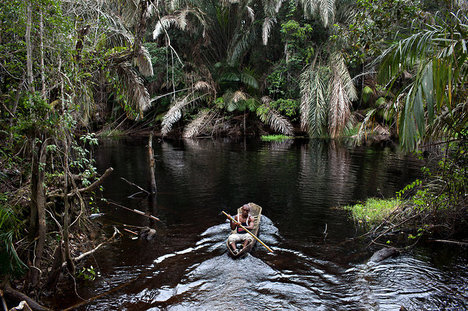 “A man in Bitouga, where people live in extreme poverty and say they resent the government’s telling them not to poach.” Source of caption and photo: online version of the NYT story quoted and cited above.