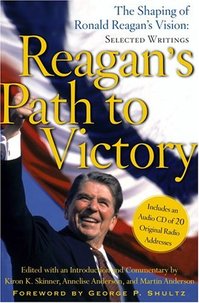 Source of the book image: http://thecommentary.ca/images/books/Reagan2.jpg

(p. 10) For better or worse, Reagan’s ability to spin yarns out of everything that ever went into his mind is on display in ”Reagan’s Path to Victory,” the fourth volume in a series of collected speeches, letters and scripts published over the past four years. This one, edited like the others by Kiron K. Skinner, Annelise Anderson and Martin Anderson, is a chronological compilation of the syndicated radio talks Reagan delivered from 1975 to 1979.
. . .
In 1980, as a reporter freshly hired by Time magazine, I was assigned to Reagan’s campaign plane. My first week on the road, while listening to him give a speech in which he talked about how trees cause pollution and other quirky notions, an aide turned to me and said, ”Where did he get those facts?” I wrote a story, parsing the misleading little factoids that studded his stump speeches; the headline was that quote. The afternoon the article appeared, I was invited to sit next to Reagan on his campaign plane. I was braced for a rough lecture, but none came. I realized that he was either smart enough not to have read the article, or smart enough to pretend he hadn’t — or merely smart enough to know it wouldn’t matter. I also learned, when I started to play the old journalistic gotcha game by questioning him on issues ranging from Taiwan to his affection for the gold standard, that he was able to flea-flick the subjects away by launching into some amusing but irrelevant anecdote. At first I thought he was a bit oblivious. Eventually, I realized I was the oblivious one. He knew exactly what he was doing.
Now, having read the collection of his radio addresses, I even know what he was thinking when he proclaimed that most pollution is caused by trees. In a rather convoluted talk, in which he identifies the main pollution problem as oxides of nitrogen, he grandly declares: ”Nature it seems also produces oxides of nitrogen. As a matter of fact, nature produces 97 percent of them. If we could successfully eliminate 100 percent of all the man-produced polluting oxides of nitrogen, we’d still have 97 percent of what we presently have.”
So we’re a little closer to knowing where Ronald Reagan got his facts, and even a bit closer to knowing where he got his beliefs. And that’s not a bad step toward understanding the deeper questions and mysteries about him.