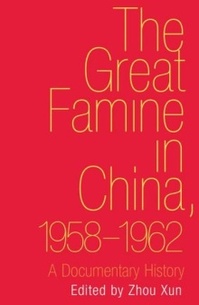 (p. C5) It is difficult to look dispassionately at some 45 million dead. It was not war that produced this shocking number, nor natural disaster. It was a man. It was politics and one man’s vanity. The cause was famine and violence across rural China, a result of Mao Zedong’s unchecked drive to turn his country rapidly into a communist utopia and a leading industrial nation.
. . .
(p. C6) . . . important pieces of evidence are being covered up . . . : Some originals transcribed in Zhou Xun’s chastening documentary history, “The Great Famine in China, 1958-1962” ( . . . ) have since been reclassified by the Beijing authorities and vanished once more into closed files.
In 2010, Frank Dikötter produced “Mao’s Great Famine,” an authoritative account of the catastrophe, written with a bravura seldom seen in Western writing on modern China. Impassioned and outraged, Mr. Dikötter detailed the destruction, the suffering and the cruelty or hubris of China’s leaders. Sorting through forgotten and hidden documents with great intellectual honesty, Mr. Dikötter ended his journey pointing his finger directly at Mao, who notoriously said, as he called for higher grain deliveries from the countryside at the height of the famine: “It is better to let half the people die so that the other half can eat their fill.”
. . .
As a teenager in 1959, Mr. Yang watched his father die of starvation. Years later, while working in a senior editorial post at Xinhua, China’s state-controlled news agency, he began his own search for the truth behind the famine. The author spent 20 years tracking down survivors across China and using his authority as a respected Communist cadre to access provincial archives. It was, in part, expiation for his shame in not questioning his father’s death.
. . .
There is no memorial anywhere in China to the victims of the famine, no public monument, no remembrance day. Graves are not marked and mass burial grounds have disappeared into the landscape. The famine’s very existence has been denied. The Communist Party will only admit to “food shortages” and “some difficulties” during the Great Leap Forward. They claim that these setbacks were a result of natural disasters.
Mr. Yang set about writing his book as a tombstone for his father and for every victim who had died from starvation. He was also erecting a tombstone for the system that brought about the Great Famine. First published in Hong Kong in 2008, Mr. Yang’s work is banned in China. The reason is clear: The book challenges the very foundation of the Communist Party’s authority.