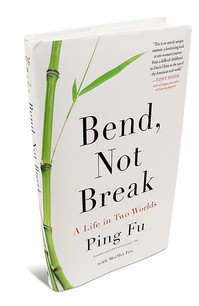 (p. A11) The history of American business is full of immigrant success stories–of men and women who flee poverty and oppression in their home countries, arrive on our shores with only pennies in their pockets, and go on to build companies that generate wealth, create jobs, and provide innovative products and services.

Count among them Ping Fu, the Chinese-born chief executive of the high-tech company Geomagic, which provides 3D-imaging for such modern-day miracles as customized prosthetic limbs. If your child wears orthodontic braces, chances are that they were designed for his teeth with the help of Geomagic technology. Ms. Fu founded the company in 1997, 13 years after arriving in San Francisco with $80 in her purse and three English phrases in her vocabulary: “hello,” “thank you” and “help.”
. . .
In the U.S., Ms. Fu worked as a maid, a waitress and a baby sitter while learning English and studying computer science. She eventually landed at Bell Labs in Illinois before striking out on her own. “I was a reluctant and unlikely entrepreneur,” she writes. In China, “I had been hardwired to think that money was evil, and traumatized as a child because of my family’s success.” Encouraged by her Shanghai Papa to follow in the family’s entrepreneurial tradition, she and her then-husband launched Geomagic. In her book, she traces the challenges she faced in building a company–obtaining funding, winning customers, managing a growing staff of professionals.
Ms. Fu’s life story raises a core question about the development of the human psyche: Why is it that, confronted with the kind of horrors that Ms. Fu experienced as a child, some survivors succeed in later life while others fail, overcome by the trials they endured?
Ms. Fu credits the tranquil, happy childhood she experienced for the first eight years of her life. She also points to the Taoist teachings of her Shanghai Papa, who taught her to admire the flexible nature of the bamboo trees that grew in the family garden. Bamboo, he told her, “suggests resilience, meaning that we have the ability to bounce back from even the most difficult times.”

For the full review, see:
MELANIE KIRKPATRICK. “BOOKSHELF; The Art Of Resilience; Ping Fu endured gang-rape and political prison in China before arriving on our shores and founding her own high-tech firm.” The Wall Street Journal (Weds., January 9, 2013): D7.
(Note: ellipsis added.)
(Note: the online version of the review has the date January 8, 2013.)

One thought on “Entrepreneur Ping Fu Learned the Resilience of Bamboo”