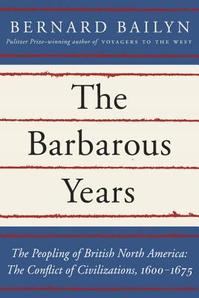 (p. C8) Mr. Bailyn opens with an account of the Indians of eastern North America in the years before English settlement. He reviews their economy, technology, religion and much else, drawing examples from the Powhatan, the Pequot and other tribes. He emphasizes the violence, terror and stoic suffering in their lives rather more than the contemporary specialists in the subject would, but brutality–on just about everyone’s part–is a major theme throughout this book.

Book under review:
Bailyn, Bernard. The Barbarous Years: The Peopling of British North America: The Conflict of Civilizations, 1600-1675. New York: Alfred A. Knopf, 2012.