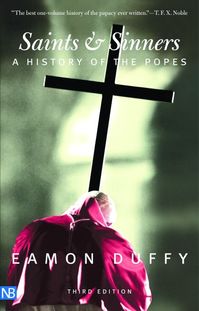 (p. C3) The popes appointed by the German Holy Roman Emperor Henry III in the early 11th century were . . . unconventional but . . . edifying. Determined to purge the corruptions of Rome, Henry personally appointed four outstanding popes, reformers to a man, all of them Germans. The greatest of them, St. Leo IX (1049-1054), arrived in Rome as a barefoot pilgrim and was the first pope to travel widely through Europe, stirring local bishops to tackle corruption and undertake renewal.

Henry III’s German popes ended the tradition that the Bishop of Rome had to be a local man, and medieval conclaves chose popes from the small but international College of Cardinals. Exceptions to this rule were seldom a success.
The most notorious case was St. Celestine V (1294), an 85-year-old hermit and visionary from Naples chosen in the hope that an “angelic Pope” would free the papacy from its financial and political entanglements. But the old man was hopelessly incompetent and easily swayed by forceful politicians. After only six months, he was badgered into resigning by Cardinal Benedetto Caetani, who succeeded him as Boniface VIII and promptly imprisoned him.
The experiment of electing a non-cardinal was tried again in 1378. After a run of seven French popes based in Avignon, the Roman mob demanded an Italian. Sixteen terrified cardinals obliged by electing Urban VI. A distinguished administrator as Archbishop of Bari, Urban VI was unhinged by his elevation. Aggressively paranoid, he alienated all supporters and appears to have murdered five of his cardinals. The French cardinals elected a rival pope, who returned to Avignon, starting a schism that would last a generation.