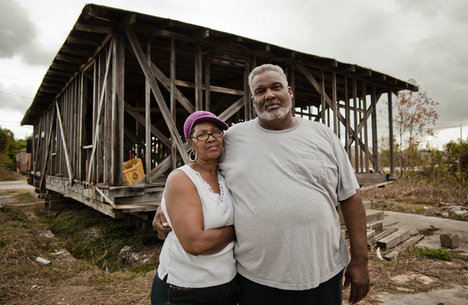 “Errol Joseph and his wife, Esther, at their Forstall Street property in New Orleans. Mr. Joseph, 62, had spent his life fixing houses.” Source of caption and photo: online version of the NYT article quoted and cited below.

(p. A1) NEW ORLEANS — Errol Joseph has the doorknobs. He has the doors, too, as well as a bathtub and a couple of sinks, stacks of drywall, a hot water heater, pipes, an air-conditioner compressor, and big pink rolls of insulation. They are sitting in a shed.

A few blocks up the street sits the gaunt frame of a house, the skeleton in which all these insides are supposed to fit. They have sat apart for years. The gap between: permits, procedures, policies, rules and the capricious demands of bureaucracy.
As people in the Northeast set off on the road back from Hurricane Sandy, there are those here, like Mr. Joseph, who are keen to offer warnings that recovery can be far more difficult than they imagine. Mr. Joseph sees his own story as a cautionary tale, though he admits he is unsure what he would have, or should have, done differently.
“Do the right thing and fall further behind,” said Mr. Joseph, a big man with a soft voice.
. . .
(p. A4) But Mr. Joseph, who had spent his life repairing houses, figured he could do it himself, and would be back at home by that summer. He spent most of his rebuilding grant buying materials, including windows, shingles and everything else in the shed. In the spring of 2009, he elevated the frame of the house, leaving it propped on wooden cribbing.
Before he took any further steps, he contacted the state for an inspection, as he had been instructed.
Then the inspectors showed up.
” ‘Do not do anything to this house until you get a letter of continuance,’ ” he recalled one inspector saying. “He said that three times. He said you would lose your money.”
So Mr. Joseph did not do anything to the house. Months went by. No letter arrived. The inspector disappeared. Officials denied that anyone had ever said anything about a letter, said Mr. Joseph, who in his regular visits to state offices would then ask for written permission to move forward anyway.
In 2010, told that he would not be allowed to do the work himself, he drew up a contract with an elevation specialist. But permission from the state to move forward was still elusive. “Your paperwork is in the system,” Mr. Joseph was told.
Though Mr. Joseph did not know it, his paperwork was blocked for months in the federal clearance process, but for reasons that remain a mystery.
The drywall rotted in the shed. The frame sat in the elements. The city, unaware of Mr. Joseph’s travails, warned of demolition. 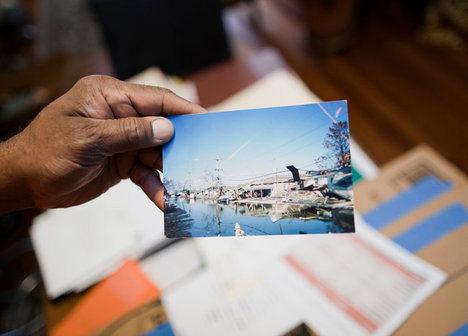 “A photograph of Mr. Joseph’s block taken shortly after Hurricane Katrina. It took years to prove his house was salvageable.” Source of caption and photo: online version of the NYT article quoted and cited above.