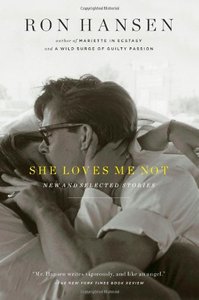 (p. 10) Hansen’s first collection, “Nebraska,” which appeared in 1989, was a work that in its wrought realism, its ways of culling grim beauty from the often harsh history of his native place, achieved a memorable intensity. “She Loves Me Not” republishes seven of those stories, but to suggest that he’s recycling would miss the larger point. Instead, he has used this early work as the basis for what becomes a very different, exploded, view of a place. In these pages, Nebraska — Omaha in particular — is both rendered and reappropriated, registered and riffed on through a range of tonalities.

The first story, “Wilde in Omaha,” is, as its title suggests, a playful reimagining of Oscar Wilde’s actual visit to that city in March of 1882. Recounted by a bumbling, fame-besotted journalist, the British writer’s short stay among the arts-avid, cornfed Nebraska bourgeoisie becomes a delightful anthology of some of this famed raconteur’s best bits. For Wilde will make no conversational response to any question that isn’t an epigram, as often as not a well-known one. Hansen’s setup lines can be almost groaningly obvious. When a Mr. Rosewater of The Daily Bee asks him, apropos of nothing, “Are you a hunter?” Wilde gets to deliver one of his celebrated bons mots: “Are you asking if I gallop after foxes in the shires? Indeed not. I consider that the unspeakable in pursuit of the uneatable.” Didn’t Monty Python run a similar shtick some years before? They did. But Hansen isn’t pretending otherwise.
“Wilde in Omaha” is followed by a string of stories from the “Nebraska” collection, and what a shift it is to go from that highly arch patter to the cruel horror of the blizzard of 1888 — a mere six years, but in terms of the circuit of human experience the very antipodes. “Wickedness” consists of a series of episodic encounters of farm people and townspeople with the completely unexpected — and unprecedented — storm. It’s mainly a catalog of last hours and final moments, but the detailing, the staging, is unsurpassed. Every moment is fully imagined. “A tin water pail rang in a skipping roll to the horse path.” A wife who has gone out to look for her husband is found “standing up in her muskrat coat and black bandanna, her scarf-wrapped hands tightly clenching the top strand of rabbit wire that was keeping her upright, her blue eyes still open but cloudily bottled by a half inch of ice, her jaw unhinged as though she’d died yelling out a name.”