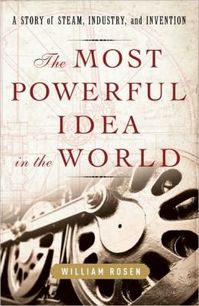 (p. 20) The obvious audience for Rosen’s book consists of those who hunger to know what it took to go from Heron of Alexandria’s toy engine, created in the first century A.D., to practical and brawny beasts like George and Robert Stephenson’s Rocket, which kicked off the age of steam locomotion in 1829. But Rosen is aiming for more than a fan club of steam geeks. The “most powerful idea” of his title is not an early locomotive: “The Industrial Revolution was, first and foremost, a revolution in invention,” he writes, “a radical transformation in the process of invention itself.” The road to Rocket was built with hundreds of innovations large and small that helped drain the mines, run the mills, and move coal and then people over rails.
. . .
Underlying it all, Rosen argues, was the recognition that ideas themselves have economic value, which is to say, this book isn’t just gearhead wonkery, it’s legal wonkery too. Abraham Lincoln, wondering why Heron’s steam engine languished, claimed that the patent system “added the fuel of interest to the fire of genius.” Rosen agrees, offering a forceful argument in the debate, which has gone on for centuries, over whether patents promote innovation or retard it.
Those who believe passionately, as Thomas Jefferson did, that inventions “cannot, in nature, be a subject of property,” are unlikely to be convinced. Those who agree with the inventors James Watt and Richard Arkwright, who wrote in a manuscript that “an engineer’s life without patent is not worthwhile,” will cheer. Either way, Rosen’s presentation of this highly intellectual debate will reward even those readers who never wondered how the up-and-down chugging of a piston is converted into consistent rotary motion.

The book under review, is:
Rosen, William. The Most Powerful Idea in the World: A Story of Steam, Industry, and Invention. New York: Random House, 2010.