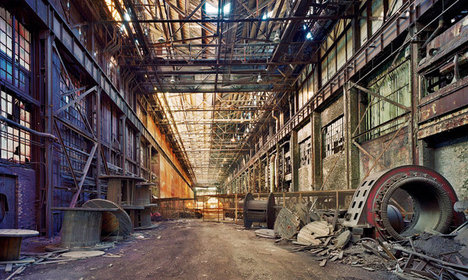 “The rolling hall at Ford’s River Rouge plant, one of Andrew Moore’s photographs of Detroit.” Source of caption and of the Andrew Moore photo: online version of the NYT article quoted and cited below.

(p. 19) A Connecticut native, Mr. Moore moved to New York in 1980, living near South and John Streets in Lower Manhattan. At night he would wander the neighborhood taking pictures of the construction of the South Street Seaport, which kindled an interest in documenting “life in flux,” he said. “I like places in transformation, the process of becoming and changing.”
. . .
Photos like those of the enormous rolling hall at Ford’s River Rouge plant and a sunset over the Bob-Lo Island boat dock were inspired, Mr. Moore said, by 19th-century American landscape painters like Frederic Church and Martin Johnson Heade.