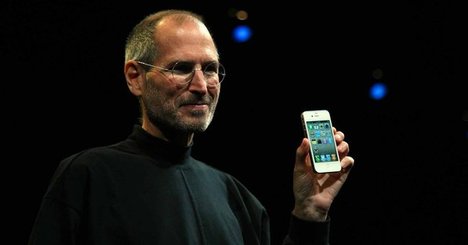 “Steve Jobs, introducing the iPhone 4 in January [2011].” Source of caption and photo: online version of the NYT article quoted and cited below.

(p. B4) “The good news for Apple is that the product road map in this industry is pretty much in place two and three years out,” said David B. Yoffie, a professor at the Harvard Business School. “So 80 percent to 90 percent of what would happen in that time would be the same, even without Steve.”

“The real challenge for Apple,” Mr. Yoffie continued, “will be what happens beyond that road map. Apple is going to need a new leader with a new way of recreating and managing the business in the future.”
. . .
His design decisions, Mr. Jobs explained, were shaped by his understanding of both technology and popular culture. His own study and intuition, not focus groups, were his guide. When a reporter asked what market research went into the iPad, Mr. Jobs replied: “None. It’s not the consumers’ job to know what they want.”
. . .
Great products, Mr. Jobs once explained, were a triumph of taste, of “trying to expose yourself to the best things humans have done and then trying to bring those things into what you are doing.”
Mr. Yoffie said Mr. Jobs “had a unique combination of visionary creativity and decisiveness,” adding: “No one will replace him.”