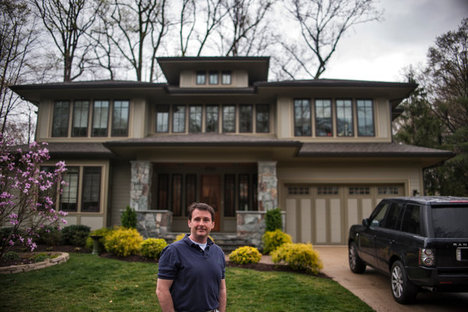 “AGAINST ALL STORMS; Charles LaDuca of Bethesda, Md., spent about $12,000 to buy and install a 14-kilowatt generator, below.” Source of caption and photo: online version of the NYT article quoted and cited below.

(p. F8) After Tropical Storm Irene pummeled the Northeast in 2011, Keith and Barbara Wolff realized it was time to act. Though they were spared during Irene, several other storms had cut the power to their home in Brookfield, Conn., forcing them to throw out food, wear sweaters to keep warm and find coffee shops to recharge their cellphones and laptops.

So the Wolffs did what many of their neighbors had done: They bought a portable, gasoline-powered generator that produced enough electricity to run many of their essential appliances, including their refrigerator, water well, hot water tank, heater and home offices.
The Wolffs paid about $1,000 for a 7,500-watt generator made by Generac. A week after paying an electrician $900 to hook up the unit to their electrical system, they put their new purchase to work when a snowstorm knocked out their power for nine days.
“It was a pretty hefty investment, but it was well worth it because when it’s cold out, you want to at least be able to take a shower,” Mr. Wolff said. “There are two things you can do: Be completely aggravated and non-functional or do a workaround so your quality of life is better.” 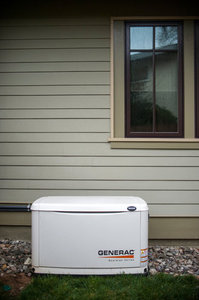 Source of photo: online version of the NYT article quoted and cited above.