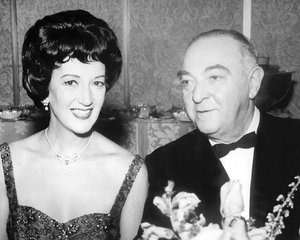 “Page Morton Black, a cabaret singer, and William Black, the founder of the Chock Full o’Nuts company, in the early 1960s.” Source of caption and photo: online version of the NYT article quoted and cited below.

(p. A17) For Gothamites of a certain vintage, it was . . . a part of life . . . — a jaunty little waltz, its lyrics connoting warmth, fiscal security and celestial reward:

Page Morton Black, the cabaret singer whose sprightly rendition of that song in radio and television ads was indelibly engraved on New Yorkers’ brains at midcentury, died on Sunday [July 21, 2013] at her home in the Premium Point enclave of New Rochelle, N.Y. She was 97.
. . .
Mrs. Black, the widow of William Black, the founder of the Chock Full o’Nuts company, curtailed her singing career after their marriage. But her voice lived on in the jingle, which was broadcast for more than 20 years.
. . .
The jingle’s original last line, “Better coffee Rockefeller’s money can’t buy,” was changed in 1957, after John D. Rockefeller Jr. and his family complained.
. . .
Chock Full o’Nuts, now owned by Massimo Zanetti Beverage USA, has revived the jingle, in a new arrangement, for its contemporary ads. The lyrics have been adjusted for inflation, with “billionaire” replacing “millionaire” in the last line.