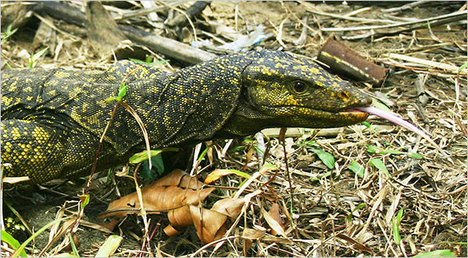 “A 6-foot monitor lizard discovered on Luzon Island in the Philippines.” Source of caption and photo: online version of the NYT article quoted and cited below.

(p. D3) The number of lizard species in the world — by most counts, around 4,000 — has just increased by one, with the announcement of a new species found on Luzon island in the Philippines.

But this is not a reptile you’d want in a home terrarium. It’s a 6-foot monitor lizard, gray with a spectacular pattern of colorful dots and other markings on its scales.
How did a species of lizard the size of a human remain undetected all these centuries? The answer is it didn’t. “It’s only new to science,” said Rafe M. Brown, an assistant professor at the University of Kansas and senior author of a paper describing the new species, Varanus bitatawa, in Biology Letters.