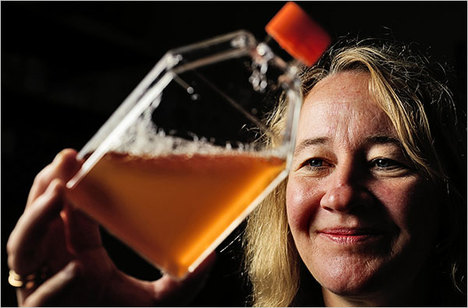 “HER TURN; Dr. Carol W. Greider is a researcher at Johns Hopkins.” Source of caption and photo: online version of the NYT interview quoted and cited below.

A. My parents were scientists. But I wasn’t the sort of child who did science fairs. One of the things I was thinking about today is that as a kid I had dyslexia. I had a lot of trouble in school and was put into remedial classes. I thought that I was stupid.
Q. That must have hurt.
A. Sure. Yes. It was hard to overcome (p. D3) that. I kept thinking of ways to compensate. I learned to memorize things very well because I just couldn’t spell words. So later when I got to take classes like chemistry and anatomy where I had to memorize things, it turned out I was very good at that.
I never planned a career. I had these blinders on that got me through a lot of things that might have been obstacles. I just went forward. It’s a skill that I had early on that must have been adaptive. I enjoyed biology in high school and that brought me to a research lab at U.C. Santa Barbara. I loved doing experiments and I had fun with them. I realized this kind of problem-solving fit my intellectual style. So in order to continue having fun, I decided to go to graduate school at Berkeley. It was there that I went to Liz Blackburn’s lab, where telomeres were being studied.

For the full interview, see:
CLAUDIA DREIFUS. “A CONVERSATION WITH CAROL W. GREIDER; On Winning a Nobel Prize in Science.” The New York Times (Tues., October 13, 2009): D1 & D3.
(Note: bold in original; questions capitalized as in print version.)
(Note: the online version of the interview has the date October 12, 2009.)