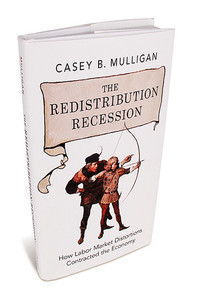 (p. 309) [Mulligan’s empirical results suggest] that employment was dropping not only because of declining demand for the employees’ products, but also because employers were substituting capital and other factors for labor. This surprising finding suggests that although a decline in aggregate demand for goods and services was one of the reasons for the decline in labor, other causes were also at play in most sectors of the economy. This fact is consistent with an inward shift in the supply of labor to the marketplace during this period.

In chapter 3, Mulligan introduces the main culprit responsible for this supplycurve shift–the unintended consequences of increases in the social safety net that substantially increased the marginal tax rate on work. In his model, Mulligan operationalizes this force into changes in the replacement rate (the fraction of productivity that the average nonemployed person receives in the form of means-tested benefits) and the self-reliance rate (1 minus the replacement rate), which is the fraction of lost productivity not replaced by means-tested benefits.
His conjecture is that, in a reverse of government policies in the 1990s that made work pay for single mothers by transforming welfare as we knew it into a program that nudged single mothers off the Aid to Families with Dependent Children rolls and into the workforce, “temporary” government program expansions to mitigate the (p. 310) short-run consequences of unemployment and the bursting of the housing bubble made a prolonged paid period of nonwork an offer that many Americans found too tempting to refuse.
Mulligan identifies and incorporates the major expansions in eligibility and benefit amounts for Unemployment Insurance and food stamps into an eligibility index that shows that most of the 199 percent growth in these programs between 2007 and 2009 was due to these changes. He uses this growth rate in a weighted index of overall statutory safety-net generosity to determine the degree to which it has influenced overall employment. He does a similar analysis of the means-tested Home Affordable Modification Program (HAMP), which facilitated substantial lender-provided discounts on home mortgage expenses for unemployment insurance-eligible workers. He finds that these market distortions that increased the marginal tax on work grew substantially in 2008, peaked in 2009–at almost triple their 2007 level–and then modestly fell in 2010 to a level appreciably above the 2007 level.
. . .
But his empirical evidence shows that the implementation of these “recession cures” was primarily responsible for the Great Recession’s depth and duration.

For the full review, see:
Burkhauser, Richard V. “Review of: “The Redistributive Recession: How Labor Market Distortions Contracted the Economy” by Casey B. Mulligan.” The Independent Review 18, no. 2 (Fall 2013): 308-11.
(Note: ellipsis, and words in brackets, added.)