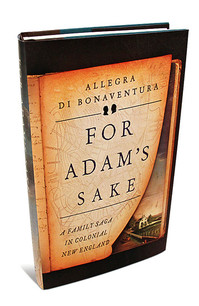 We are taught in elementary school that the roots of America lie in the religious Puritans and Pilgrims. But I believe that there is something to Russell Shorto’s argument that we under-appreciate the contribution of the secular libertarian Dutch of New Amsterdam. In this continuing debate, it is useful to have an accurate history of all sides.

(p. A11) The great Puritan divine John Winthrop, founder of the Massachusetts Bay Colony, probably wouldn’t make it through Allegra di Bonaventura’s book without suffering a cardiac episode. Set principally in the seaport town of New London, Conn., “For Adam’s Sake” provides an astonishing worm’s-eye view of Winthrop’s beloved Bible Commonwealth in the throes of its ghastly unraveling, even as it narrates an intimate history of racial slavery in early New England through the entwined lives of five families (the Winthrops among them).

Many readers will be surprised to learn that slavery flourished in colonial New England–albeit on a smaller scale than on the plantations of the antebellum South. And they might be forgiven their incredulity: “New Englanders in the nineteenth century,” Ms. di Bonaventura writes, “studiously erased and omitted inconvenient and unsavory aspects of their region’s collective past in favor of a more heroic and wholesome narrative of their own history.” Such acts of moral cleansing all but obscured the lives of enslaved New Englanders well into our own time.

For the full review, see:
KIRK DAVIS SWINEHART. “BOOKSHELF; Not Your Parents’ Puritans; Slavery flourished in colonial New England. Yet the Puritans’ erasure of its signs have obscured their crimes well into our own time.” The Wall Street Journal (Mon., Aug. 5, 2013): A11.
(Note: the online version of the review has the date Aug. 4, 2013.)

The relevant book by Russell Shorto is:
Shorto, Russell. The Island at the Center of the World: The Epic Story of Dutch Manhattan and the Forgotten Colony That Shaped America. New York: Doubleday, 2004.