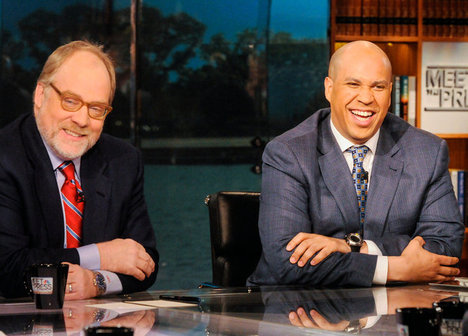 “Cory A. Booker, right, the Democratic mayor of Newark, on “Meet the Press” with Mike Murphy, a Republican strategist. “Enough is enough,” Mr. Booker said of attacks in the presidential race.” Source of caption and photo: online version of the NYT article quoted and cited below.

Romney was criticized for his past association with Bain Capital which was criticized for its role in the process of creative destruction. Democrat Cory Booker, to his credit, defended Bain. (But to his discredit, he later went wobbly when fellow Democrats were appalled by his defense.)

(p. A15) Mayor Cory A. Booker of Newark, a prominent Democrat enlisted as a surrogate for President Obama’s campaign, sharply criticized it on Sunday for attacking Mitt Romney’s work at the private equity firm Bain Capital.

Mr. Booker, speaking on the NBC program “Meet the Press,” made his comments in response to a television advertisement the president’s campaign unveiled last week. It portrays Mr. Romney, the presumptive Republican presidential nominee, as someone who eliminated jobs for the sake of profits during his years running Bain Capital.
“I have to just say, from a very personal level, I’m not about to sit here and indict private equity,” Mr. Booker said. “To me, it’s just we’re getting to a ridiculous point in America, especially that I know I live in a state where pension funds, unions and other people are investing in companies like Bain Capital. If you look at the totality of Bain Capital’s record, they’ve done a lot to support businesses, to grow businesses. And this to me, I’m very uncomfortable with.”