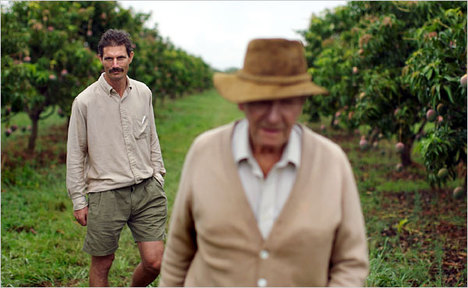 “Mike Campbell, 76, challenged Zimbabwe’s land redistribution law. He and his son-in-law, Ben Freeth, 38, were beaten by a gang.” Source of caption and photo: online version of the NYT article quoted and cited below.

(p. 1) CHEGUTU, Zimbabwe — Edna Madzongwe, president of the Senate and a powerful member of Zimbabwe’s ruling party, began showing up uninvited at the Etheredges’ farm here last year, at times still dressed up after a day in Parliament.

And she made her intentions clear, the Etheredges say: she wanted their farm and intended to get it through the government’s land redistribution program.
The farm is a beautiful spread, with three roomy farm houses and a lush, 55,000-tree orange orchard that generates $4 million a year in exports. The Etheredges, outraged by what they saw as her attempt to steal the farm, secretly taped their exchanges with her.
“Are you really serious to tell me that I cannot take up residence because of what it does to you?” she asked Richard Etheredge, 72, whose father bought the farm in 1947. “Government takes what it wants.”
He dryly replied, “That we don’t deny,” according to a transcript of the tapes. 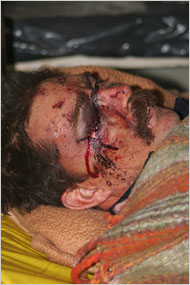 “Mr. Freeth circulated photographs of his injuries online after the invasion of his farm.” Source of caption and photo: online version of the NYT article quoted and cited above.